A past that is rich in tradition

The use of vinegar dates back to the most ancient civilisations. There are numerous literary testimonies, such as Virgil, who already described “the custom of cooking must” in the Georgics, and Apicius, who documented the use of cooked must in the preparation of food, up to the time of the Estense Dukes, Lords of Ferrara and Modena.

This volume includes an account of “that lauded vinegar” that Boniface, Margrave of Tuscany sent to King Henry III, the future emperor of Germany, along with a few other goods. On his way to Rome to be crowned by the Pope, the king stopped in the city of Piacenza; he was extremely fond of that great and magnificent gift.

The letter accompanying the vinegar sent by Boniface, Margrave of Tuscany to King Henry III – September 1046 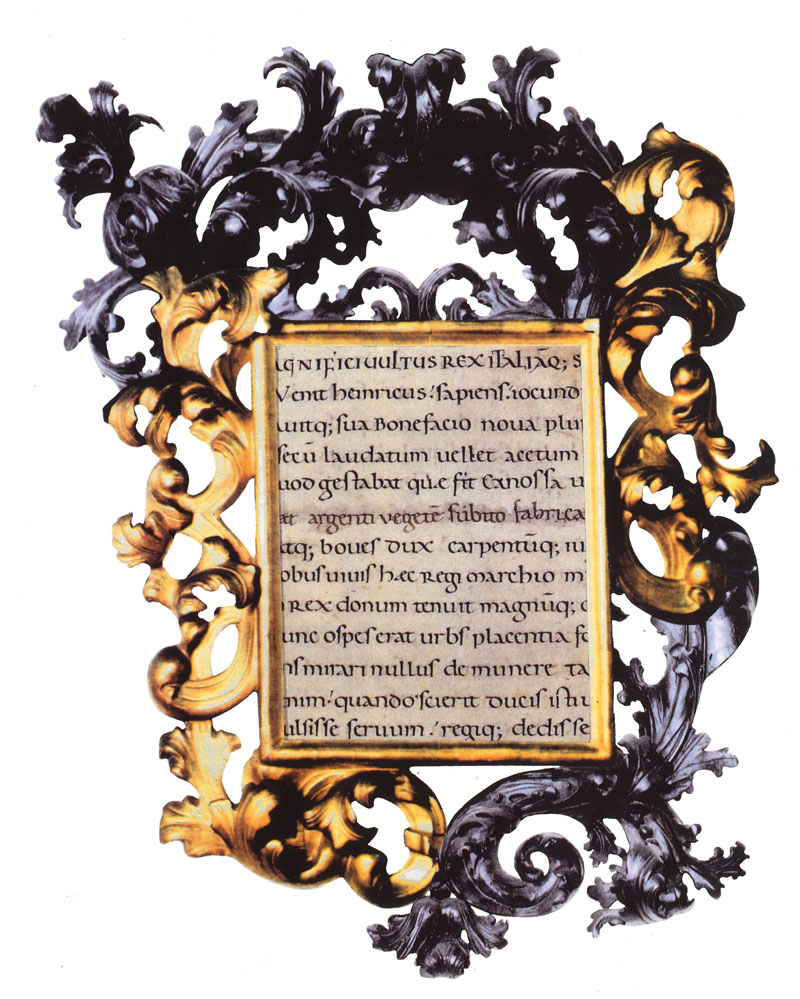 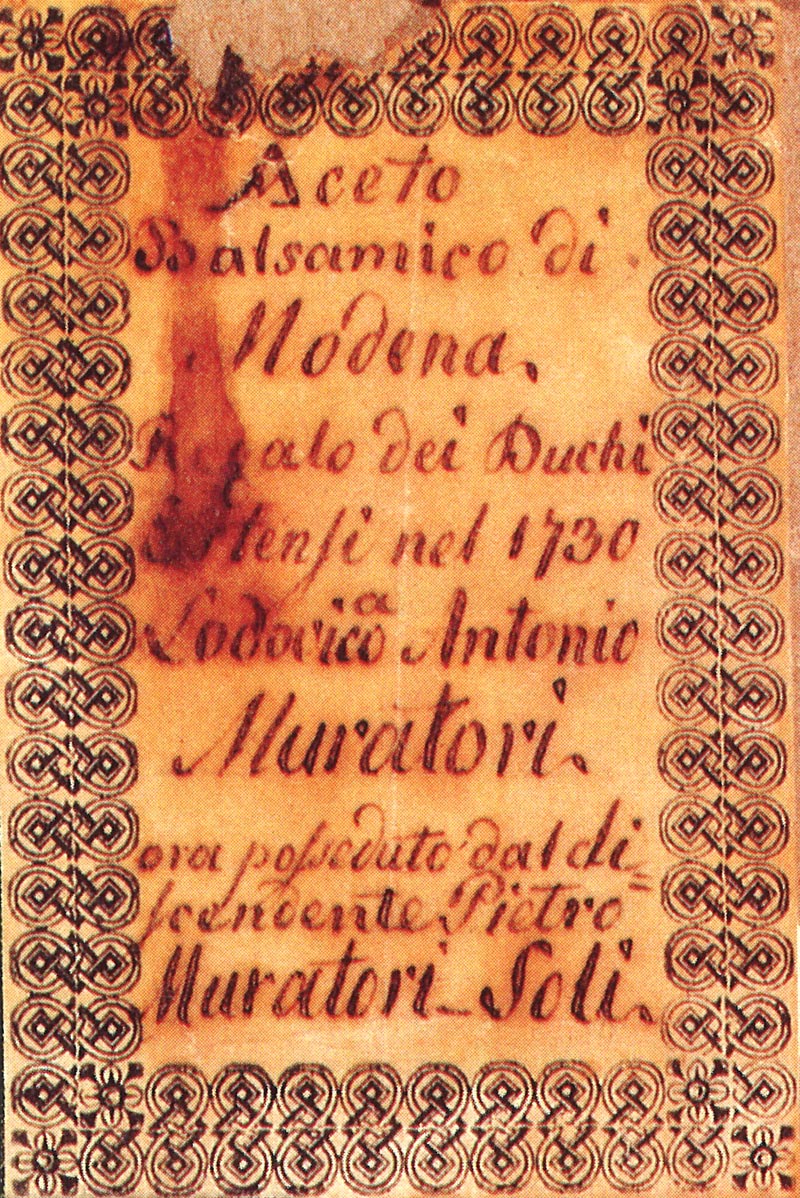 The custom of presenting respected individuals with the precious gift of traditional balsamic vinegar continued from the time of Henry III. Through historical documents, we can trace back to the time when an ampoule of the best vinegar was gifted to the family doctor or lawyer.

In 1730, Duke Rinaldo I d’Este and Duchess Carlotta Felicita of Brunswick presented an ampoule of vinegar to Lodovico Antonio Muratori (1672 – 1750), historian and director of the Estense Library, in recognition of his work. It seems that the distinguished historian treated this gift, as per his professional habit, like a precious book; he deemed that it should be kept for posterity so that future generations could understand its content and essence.

At the end of the 16th century, the city of Modena had become the capital of the Estense Duchy. Various documents dating back to the epoch and subsequent eras explicitly attest that the ducal court had a keen interest in Traditional Balsamic Vinegar of Modena. It was used to “enrich” their cuisine and as a rare gift to important figures.

“Dear Most Honourable Master, 13 November 1774
We do not recognise a generous spirit any less for his accepting of small gifts than in his giving of large ones. Encouraged by this thought, I boldly present your illustrious self with four small receptacles of my own Balsamic Vinegar, which certainly have no other virtue than of being extremely old.

I humbly beseech your illustrious person to deign to accept this pure act of respect, weak as it is; and likewise to write to me in the role of your devoted servant, which I have the honour of declaring myself.

Yours faithfully.
Modena, 13 November 1774
PS. In order to make sure that the vinegar is not changed, I have marked the Box, and Decanter with this number and it is free of port duties.” 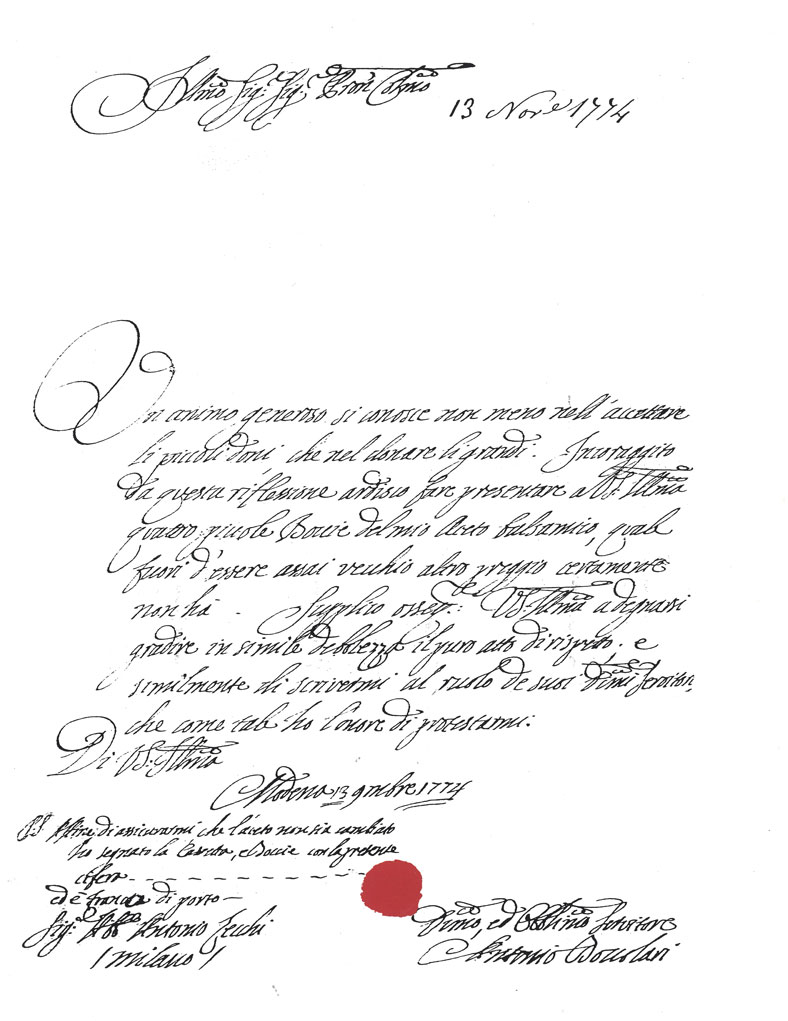 Accounts of Traditional Balsamic Vinegar are reinforced in the 19th century, by consulting the dowry lists of noble families from Reggio Emilia. At the time it was good practice to enrich the dowry of the woman who was about to get married with bottles of fine balsamic vinegar and sets of small casks containing the precious “black gold”.

A letter written by the solicitor Francesco Agazzotti in 1862 to his friend Pio Fabriani represents a milestone. In it, he describes the procedure for the production of Traditional Balsamic Vinegar of Modena in detail. The letter has become the people of Modena’s guidebook for the care and management of the “acetaia”.

Letter from Francesco Aggazzotti to the “Distinguished Mr Pio Fabbriani of Modena, solicitor”:

Regarding balsamic vinegar of Modena (Modena, 2 March 1862.)
Practical experience since time immemorial expresses a preference for white or yellow grapes, and more precisely, Trebbiana, in the making of balsamic vinegar. This strain grows very well in the hills of Modena, in Solignano, Torre, Castelvetro and Levizzano. It is a large grape, not very close-set, forming a rather elongated bunch, which acquires a beautiful golden colour and is one of the last to ripen; it is not uncommon to be surprised by frost on the plant. It is also a plant that, subjected to the process to obtain alcohol, provides a greater product than any other local variety. However, the price of the work makes it much more profitable to use in preparing the so-called pomace wines for domestic use and also in the preparation of the family wine, which is quite good and long-lasting even with only one part of water over nine parts of the aforementioned grape. Therefore, when the Trebbiana ripens, it is collected, pressed, or placed in vats as is usually practised in vinification; but as soon as the vinous fermentation has developed, about twenty-four hours later, that is, as soon as the twigs and stalks float (these are removed), as I said, the must is collected by passing it through a loose sieve or a wicker basket…

Nowadays, the production methods that have been handed down through the centuries with love and passion have been transcribed in the Production Regulations. The products are checked by authorised certification bodies, which guarantee their authenticity.